So I hesitated about doing the Autocross at The Gathering.  Last year, one of our club members tore out his trailing arm mount.  I had the rear fixed up – reinforced Differential Mounts, new trailing arm mounts, Goodparts CV joint axles.  I decided to go for it. 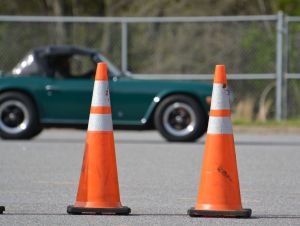 My goals for the Autocross were to not mess up the car, not get lost on the course, and to not embarrass myself too badly.  During the third run, while cornering hard, all of a sudden something didn’t feel right.  I decided not to take a fourth run.  I was pleasantly surprised to place second.  I won’t tell you how many entered.

So afterwards, the “6” was missing and not running well.  Part way home, I realized what it might be.  I popped the distributor cap, and there was evidence that the end float on the distributor was messed up.  The shaft had risen, causing the rotor to dig an arc across the inside of the cap.  The rotor’s little “tab” inside that keeps it from spinning on the shaft was broken, just barely keeping it pointed in the right direction.

I limped home at 45 MPH, keeping the RPMs down to 3,000 or less.   The end float, according to a feeler gauge check, was far too much.  Yesterday I sent the distributor to Jeff at Advanced Distributors for a rebuild.  I asked him about going to an electronic ignition.  He said on his dyno tests, points outperform electronics!   So I’ll go points.  I can always change later.  I did order a Bosch blue coil and Bosch wire set however, per what I have read on the forums, and Jeff’s recommendation.